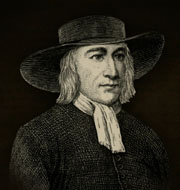 In 17th century England it was illegal to be a Quaker. George Fox, founder of The Religious Society of Friends, was persecuted and imprisoned for publicly denouncing the Church of England and advocating a personal relationship with the Divine. Fox preached throughout northern England and his eventual 60,000 Quaker followers shared the name “Friends.” 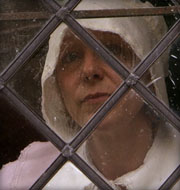 Margaret Fell, the wife of a wealthy judge, became “convinced” by George Fox’s ideas and offered her home, Swarthmoor Hall, as protective shelter for Quakers in the north of England. She was well versed in theology and wrote many treatises on her Quaker beliefs. Women Speaking Justified was published in 1666, in which she defends a woman’s right to teach and preach. 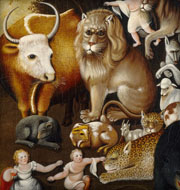 “We utterly deny all outward wars and strife, and fighting with outward weapons…” This is the essence of The Quaker Peace Testimony, written by George Fox and Friends in 1661. This anti-war declaration of nonviolence later inspired Edward Hicks, one of the few accepted Quaker artists in America during the 1800s, to paint more than 60 versions of “The Peaceable Kingdom” which are now displayed in museums worldwide. 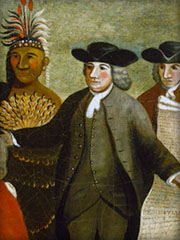 William Penn, an Oxford-educated attorney, came to Quakerism as a young man. He befriended George Fox and Margaret Fell and was jailed in the Tower of London for promoting his faith. In 1681, he persuaded King Charles II, as a repayment for a loan from Penn’s father, to grant him over 45,000 square miles of land in America to charter a new colony. As Governor of Pennsylvania Penn made honest treaties with Native Americans and instituted legal reforms such as freedom of religion, no unjust imprisonment, trial by jury, and other democratic ideals. 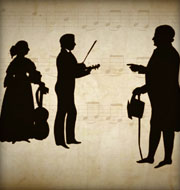 After their first explosive growth in the 1600s, Quakers retreated into a restrictive community defined by internal group discipline. Reading the Bible, not marrying outside the Meeting and wearing somber clothes became the norm. Music, dancing and art were frowned upon. As a result, from 1740-1850, tens of thousands of members left the religion. 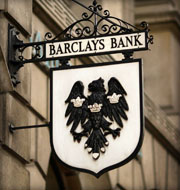 While others haggled in the marketplace, Quaker tradesmen introduced fair, fixed prices. Their reputation for prudence, honesty and industry made them natural bankers. In 1690, Quakers started investing money from depositors in London at Barclays Bank and co-founded Lloyds Bank. This tradition continued in America. 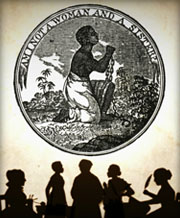 In 1688, Philadelphia’s Germantown Meeting was the first religious organization to condemn slavery in America. At the 1758 Philadelphia Yearly Meeting, the practice of slave holding was unanimously denounced at the passionate urging of John Woolman. By 1826, Quakers Levi and Catherine Coffin were sheltering fugitive slaves in their Indiana home as part of the Underground Railroad. Many Quakers were proud of leadership roles in pointing runaways to safe havens and refusing to inform authorities. 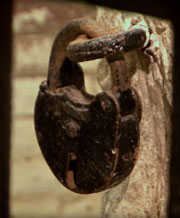 Quakers are frequently blamed for the idea of solitary confinement, due to their involvement in prison reform in 19th century America. Quakers designed single-prisoner cells with skylights for praying to heaven for forgiveness. This was seen as an alternative to the corrupt, crowded, unsanitary conditions that proliferated in prisons of the 1700s. Although well intentioned, it has morphed into an intensely problematic solution in the hands of those who seek to punish rather than reform. 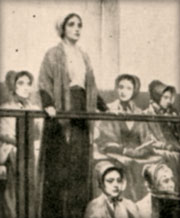 Lucretia Mott, Quaker minister and co-founder of the Philadelphia Female Anti-Slavery Society in the 1830s, served as the first president of the American Equal Rights Association. Fellow Quaker Susan B. Anthony also campaigned for abolition and women’s suffrage. When the 19th Amendment was passed guaranteeing women the right to vote in 1920, the legislation was named the Susan B. Anthony Amendment in tribute to her dedicated work. 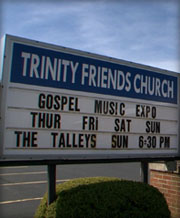 Beginning in the mid 1850s many Quakers converted to the “evangelical” branch of Quakerism. They introduced worship services with singing and prepared passages from the Bible, as coordinated by a pastor. Earlier branches of the religion continue to practice silent or “unprogrammed” worship, where the order of service is not planned in advance. Although predominantly silent, it may include unprepared vocal ministry from those present. 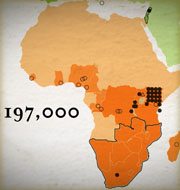 1902 marked the beginning of a widespread Quaker movement in Africa when three Quaker missionaries from Cleveland, Ohio traveled from the US by boat to the port of Mombasa, Kenya. They continued by rail to the end of the line to Kisumu, then by foot to Kaimosi and set up a mission there. Today there are about 400,000 Quakers in the world, and over one-half of them live in Africa. 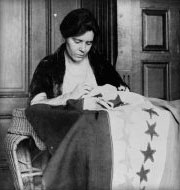 On March 3, 1913, Quaker Alice Paul organized the first March on Washington in support of women’s suffrage. In 1916 Paul’s National Woman’s Party was the first group to ever picket the White House. She and fellow activists were arrested. When she began a hunger strike in prison, Paul was force fed through her nostrils. Despite the torture, the NWP persisted and the 19th Amendment was finally ratified in 1920, granting women the right to vote. 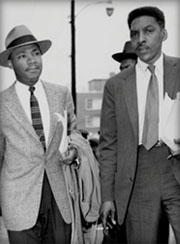 African American civil rights activist, orator, writer, and pacifist Bayard Rustin was deeply influenced by the Quaker roots of his grandmother. He was a conscientious objector which earned him a three-year prison sentence during World War II. Rustin advised Dr. Martin Luther King on strategies of nonviolent resistance and was chief organizer of the 1963 March on Washington. As a result of the stigma of being openly gay, Rustin was not widely recognized during his lifetime, but was posthumously awarded the Presidential Medal of Freedom by President Obama. 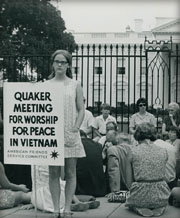 Historically Quakers have protested participation in war, and many Friends have refused to serve in the military. The American Friends Service Committee, a Quaker relief organization, was founded in 1917 during World War I. It provides conscientious objectors with an alternative to military service. The AFSC received a Nobel Peace Prize in 1947. In 1955, they published Speak Truth to Power: A Quaker Search for an Alternative to Violence. 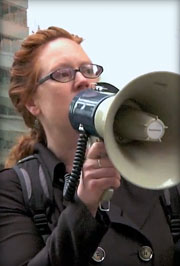 One of the basic Quaker testimonies is Stewardship of the Earth. A current focus of Quaker activism is our concern for the environment. Earth Quaker Action Team is a grassroots, nonviolent direct action group fighting for a green and sustainable economy. EQAT actively and nonviolently confronts corporations that indiscriminately and dangerously misuse our resources for profit. Recent examples are their winning confrontation with PNC Bank and its funding of mountain top removal coal mining in West Virginia, and their ongoing demands that Pennsylvania’s PECO Energy company shift to locally generated solar power.